The Algarve-Portimao, Sagres, and Lagos, Portugal 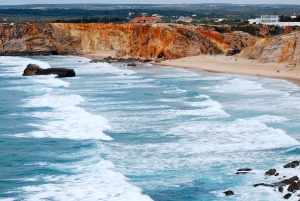 Our final port before disembarking in Lisbon is Portimao, Portugal.  We only have the afternoon in port so we took a countryside tour of the Algarve, this seaside region of Portugal of about 100 miles.  The countryside was green and inviting, with attractive farming plots and orange groves.  There were horses everywhere, some working but mostly those enjoying an open field. 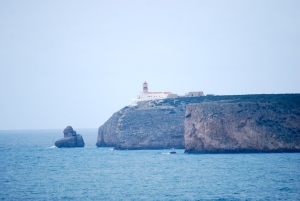 The lighthouse at Cape St. Vincent as seen from Sagres.
©Jean Janssen

It is a national holiday in Portugal, celebrating the anniversary of their freedom from dictatorship in 1974.  The breaking point came when the government kept sending unprepared young boys into battle in Africa in a war that could not win.  It was not a good day to just stay in Portimao where most places are closed.  We went to a national monument and a resort city and saw people enjoying their holiday.

We passed through many small villages with vacation resorts and our guide reminded us that this is the area where the McCann girl was abducted.  He talked about how hard they have had to work to overcome the reputation that this is a dangerous place.  He actually mentioned safety repeatedly and made it a point to note the safe areas.  It was all so peaceful that it was hard to think of this area as a “hotbed” of criminal activity.

Our first stop was in Sagres and the fort remains there.  This spot was made famous by Henry the Navigator and Sir Francis Drake, among others.  There were sweeping views, including Cape St. Vincent, and a beautiful, but treacherous beach.  I almost didn’t come on the tour today, as my toe was very swollen.  Ice has helped.  I wasn’t able to walk the full length of the coastline at the fort, but found what I did see breathtaking.

The fort at Sagres
©Jean Janssen

There is a posada nearby.  This is one of 46 monument sites in Portugal that has been converted into a hotel and is run by the government.  They are often in lovely places like castles and estates and focus on national heritage.  They have similar hotels in Spain called paradors.  Our aborted stop at the top of the mountain in the Canary Islands was one such parador.  Unfortunately, rain and cold weather kept us from that view. 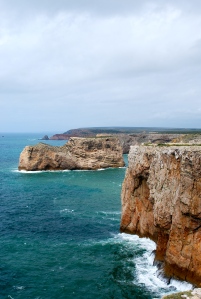 At the Southwest corner of Europe
©Jean Janssen

There are strong winds along the coastline and the energy-producing wind turbines are common in the area.  Unfortunately, birds often get caught in the turbines, a logical occurrence but one I hadn’t thought of.   70% of Portugal’s power comes from Hydroelectric energy produced through the use of water and dams. 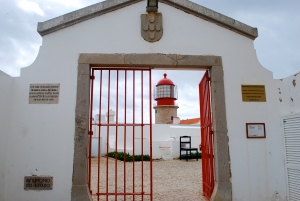 We drove next to Cape St. Vincent and its lighthouse.  This is where the most southern and western coasts of Europe meet.  From the point you can look in both directions and see the “corner” of Europe in the Atlantic.

Main Plaza in Lagos, Portugal with the statue of
Henry the Navigator and a seagull “bird bath”
©Jean Janssen

Finally, we drove to Lagos, a charming waterfront village and marina.  There were actually quite a few places open here for the people enjoying the holiday.  There were many sidewalk cafes and souvenir shops, some carrying goods made in Portugal.  There was also a small craft fair where you could buy homemade items directly from the artist.  The large square at the waterfront had a bronze statute of Henry the Navigator with a pool in front of it where the seagulls bathed.

tile facade on a building in Lagos, Portugal
©Jean Janssen

The small buildings that made up the village often had facades covered in square tiles in solid colors or patterns.

The streets were patterned cobblestone.  There was another plaza that had a more modern style statue of a young prince who was unprepared for the task of leaving his troops into war.  He is shown as a small figure with armor that is too big for him.  There was a singling group performing on the stairs at the base of the statue in celebration of the Portuguese holiday.

I am a retired attorney who loves to travel. Several years ago I began working on a Century Club membership achieved by traveling to 100 "foreign" countries. Today, at 49 years of age the count is at 82. Many were visited on land based trips. Some were cruise ports. Some were dive sites. Most have been fascinating.
View all posts by travelbynatasha →
This entry was posted in cruises, international and tagged Algarve, Cape St. Vincent, Lagos, Portimao, Portugal, Sagres. Bookmark the permalink.

2 Responses to The Algarve-Portimao, Sagres, and Lagos, Portugal